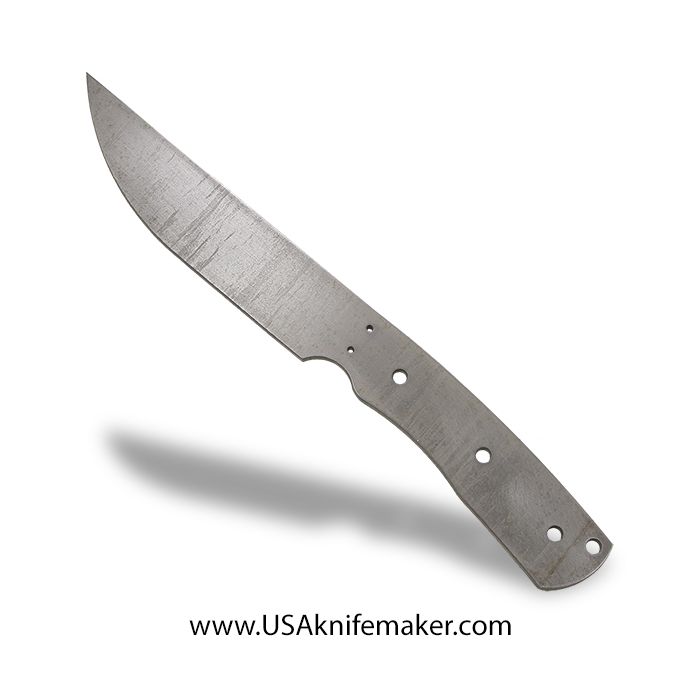 Note: this blade will need to be heat treated.

1095 is a high carbon steel with .95% carbon (the 95 in 1095) and is proven, good quality knife steel with good edge retention. 1095 is considered slightly “fussier” about heat treating than say 1080 or 5160. This isn’t a deal breaker at all and really can be mostly ignored. Follow the recipe below and you shouldn’t have any problem.

Normalizing: Normalize by bringing to 1575F, soak for 5 minutes and allow to cool in still air. Normalizing steel allows the crystalline structure to be reset and resets the carbides back to uniformity. Steel doesn’t like uneven structure. If the carbides have gotten all bunched up and oversized from forging, the steel won’t hold an edge as it potentially could. Bar stock from the mill probably shouldn’t have to be Normalized, especially if it has been annealed. Material that has been forged could probably benefit. Basically, heat it in your forge or oven and let it air cool. Done.

Annealing: Anneal by heating to 1475F and cooling at a rate no faster than 50F per hour. Generally, most guys heat to temperature in their forge as the last heat of the day, turn off the forge and let the steel cool in the forge overnight. If you have other work you want done, I use a half size trash can full of vermiculite. I heat a couple large bars of scrap steel to add mass/heat. I heat the steel to temperature and put it all in the vermiculite to cool down slowly using the vermiculite as an insulator. Cooling slower in the forge works better but cooking in the vermiculite works fairly well also. Some guys use lime instead of vermiculite.

Hardening: Heat to 1475F or past non-magnetic which is around 1425F. Generally, in a forge, this means heating it until a magnet doesn’t stick and then “just a little more” to get the extra heat into the steel past non-magnetic. A few minutes at this temperature will not grow grain but does allow the carbon to get “into solution”. Overheating steel into the 1550F 1600F range and beyond and soaking it will grow grain. Simple, heat it to non-magnetic, give it another minute or so to heat a bit more, quench. You will see somewhere, a lot of places in fact, that the steel really needs to be cooled off at a high rate, like 1 to 2 seconds and that is absolutely true. That doesn’t mean you only have 1 second to get from your heat source to your quench. Moving a blazing hot piece of steel from heat to oil is where a lot of fires get started. A guy knocks over the oil, drops the red hot steel into the oil and instant fire! The steel will retain heat and survive a few seconds in the air as you move from heat to quench. Do this safely and be prepared for a flare up of fire and a large amount of smoke. Always be prepared for a fire.

Tempering: If you did everything right quenching, your steel is around 66RC and fragile as glass. If you drop it now, it will shatter. You want to temper it as soon as it gets to room temperature. I have a left a piece of steel overnight untempered and found it cracked the next day from the stress hardening puts into the steel. It’s rare but it happens. Temper twice at 2 hours each allowing the steel to cool back to room temperature between cycles.

Cryo Treatment: Cryo treatment, soaking steel after hardening but before tempering at temperatures at least minus -90F (dry ice range) to minus -290F (liquid nitrogen range) for eight hours.  Most high carbon steels are generally not cryo treated as the benefit to carbon steels is usually not as significant as it is with the newer super stainless steels. Many people will say a properly heat treated steel should not need any cryo treatment as it only “makes up for a poor heat treat” This sounds good but isn’t necessarily true. Cryo treatment is an industry recognized practice in heat treating and simply wouldn’t exist as an unnecessary expense if wasn’t a legitimate extension of the heat treat, quench and temper process. Big business doesn’t waste money on steps on heat treating it doesn’t need to do. Having said all that, most don’t cryo treat carbon steels but you can if you want. Soak it in liquid nitrogen overnight or even a cooler full of dry ice. You will read about guys using acetone in dry ice. Acetone is crazy flammable. Avoid it please. Use Kerosene or even diesel fuel if you feel you need a liquid medium but just putting your blade under a block of dry ice is all you need to do. Some guys do one low temper heat at at 300F to 350F sometimes called a “snap temper” to take some of the stress out of a hardened blade before cryo. This lowers the chance of cracking the blade. I have never had one crack from cryo treating a blade after quenching but that just means I have been lucky. Eventually I will, it is just a matter of time.

Austempering: This is a process of hardening steel into Bainite, something we knife guys generally don’t use. We are after Martinsite steel.