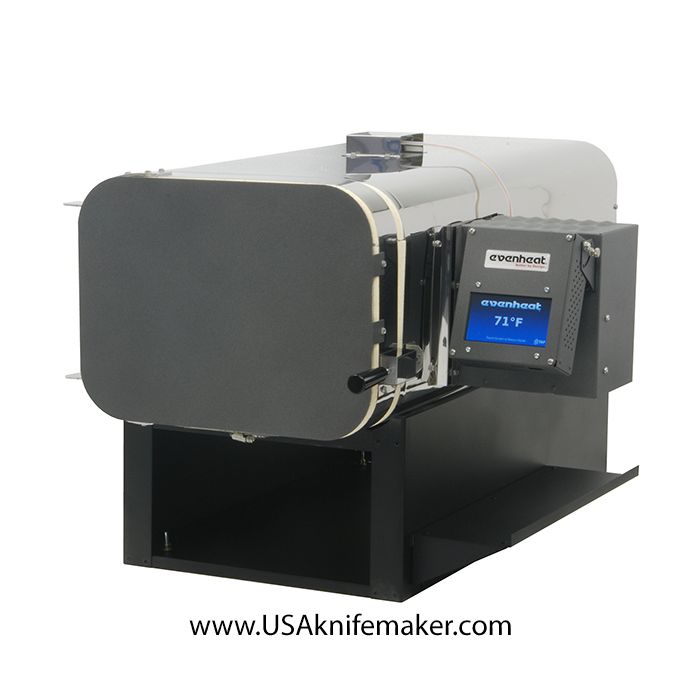 KO 27:
The KO 27 is our deepest model of KO series heat treat ovens and lends itself well to production and long work.

The KO 27 features a swing-out door and cool-touch handle for comfortable use, full stainless jackets and corner mounted hardware for strength and a variety of control options.

The Express Mode is designed to offer quick and easy programming for a variety of materials including Glass, Metal Clay and Ceramic.

Glass Express programming asks for your glass COE (90, 96 or 82), desired firing style (slump, tack fuse, full fuse or cast) and firing speed (fast, medium, slow and extra slow). It's easy and it's accurate while allowing you to fire glass from many manufacturers.

Ceramic Express programming asks for your desired cone number (022 thru 10) and firing speed. No cones needed as all firing is done automatically.

The Custom Mode allows you to control the rate of temperature change, final temperature and any desired temperature hold time up to 8 times per use or firing.

The Set-Pro also allows you to store up to 4 separate firing programs. This means you can keep your favorite programs in place and use them when needed. No need to re-program, just pick your firing and go.

For those times when "enough is enough" the Set-Pro allows you to skip or move ahead to the next firing segment. Very useful when you're satisfied with the current results and need skip ahead. Great for getting to the anneal quickly!!

It's always nice to what the controller is doing during a firing. Our View Segment feature tells you which segment you're currently firing and whether your ramping or soaking. Excellent, need to know info with the press of a key.

The Set-Pro includes a Review key that allows you to double check your program before actually firing.