Out of stock
SKU
SS-LP-.080-Bolt-CF-
Shelf Location
F4.3
Notify me when this product is in stock
Print Add to Wish List 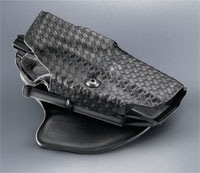 This thermal forming material is especially formulated for sheaths and holsters. We also carry Kydex(tm) in some colors which is similar. This Boltaron material, formula #4332 was designed specifically for the our industry. I think when you try this material, it will be your material of choice going forward.

A bit of clarity: Boltaron(tm) and Kydex(tm) are both trademarked to their respective companies. Both are thermal molding plastics used in tens of thousands of applications. Just about everywhere on the planet earth, you are most likely with in 20 or 30 feet of some thermal molded plastic that is either Kydex or Boltaron. If you held a piece of each in your hand, you most likely could not tell them apart. If you molded one of each, again, you most likely could not tell them apart but they are in fact different. Both of these trademark products have over a dozen formulations and each has different properties. If you have used one in the past and liked (or didn't like it), try to found out exactly which formulation you used. There is a huge difference in performance and suitability for molding knife sheaths or gun holsters depending on which formulation you use. Generally, each formulation has a different cost.

To add to the confusion, some time ago someone created the name Concealex for thermal molding plastic for marketing purposes. I have to admit the name sounds pretty cool and tells a story. No one really knows where that name came from but it is used commonly as a generic term in the knife and gun industry now and it may be Kydex or it may be Boltaron or even another thermal molded plastic. We have used the name Concealex here in the past but will discontinue its use in favor of more specific product identification.

Here is some information from the Boltaron people:

Boltaron 4332 sheet is a proprietary, fire retardant, PVC/Acrylic alloy that offers outstanding physical properties, making it the ideal material from which to thermoform and fabricate parts subjected to high impact, abrasion, harsh chemicals and/or temperature extremes.

With an Izod impact rating of 20 ft lbs/in (1060 J/m) Boltaron 4332 is among the most impact resistant PVC/Acrylic alloys ever produced.

It is also exhibits extreme resistance to heat deformation and cold weather cracking, and is highly resistant to caustic and acidic chemicals spanning the entire pH range, in addition to offering greater abrasion resistance than stainless steel.

At the same time, Boltaron 4332 is non-hygroscopic, eliminating the time and cost associated with pre-drying other thermoplastics, and is readily thermoformed, yielding uniform wall thickness in deep recesses and on sharp outside corners.

Easy to use but difficult to damage, Boltaron 4332 eliminates the compromise associated with lesser PVC/acrylic alloys, FR ABS, and other fire rated thermoplastics, meeting and exceeding the most demanding requirements of fomers, fabricators and OEMs alike.